Note: This is a community-written piece submitted during our ongoing Article Contest campaign. The views expressed within are those of the author and not necessarily those of the pSTAKE team.

Stay tuned to our Twitter page for your chance to become a published author in the pSTAKE Blog. The details of our next Article Contest will be shared on Friday, November 12, 2021.

Staking is a term that is so frequently and generally used within the blockchain space these days. Almost everyone in the space is talking about one staking program or another. You might ask, “What exactly is staking and why is there so much fuss and news about it in the world today?“.

This and more, we will discuss in this article as we explore staking, specifically the many reasons that people stake and the how to make the process more efficient. That will bring us to liquid staking and how it benefits the protocol security.

With staking, we refer to locking the coins of a blockchain project in a cryptocurrency wallet or staking platform in order to support the network of that project by providing security. To fully grasp this concept, we have to understand what a blockchain is.

A blockchain is a chain of data (records) referred to as blocks and linked together by cryptography (code). The blockchain is a growing chain of transactions with new blocks being continually added to the chain. Now, there’s more to the blockchain than meets the eye. A user might begin to ask, “why would I want to secure a network that doesn’t belong to me or my father?”.

Staking comes with rewards for users who stake but to understand the basics of rewards, we first have to understand how blocks are added to a growing chain. Two common mechanisms for this exist: Proof of Work (PoW) and Proof of Stake (PoS). We’d delve into them briefly and see where the staking process comes in.

As stated earlier, one very key aspect of the blockchain technology is the addition of blocks to the growing chain. Let’s talk about the two common mechanisms that exist to facilitate this.

In this mechanism, a mathematical puzzle (hash) is set in place and miners race against time to be the first to solve it, with the winner getting the right to add the next block to the growing chain. The miners usually get rewarded for success.

This mechanism has the same aim but uses a different approach. Here, the users lock their stake with a validator, which gets the chance to be chosen by the protocol to be the one to add the next block to the growing chain. The more you stake, the more rewards you get for helping to secure the network.

The concept of liquid staking is gaining traction as users try to maximize the potentials of their staked assets in order to earn more rewards. To understand liquid staking, we need to understand the basics of staking. When you stake, you’re effectively locking your assets to help maintain the effective running of the protocol you’re staking for/on. The assets are locked and you can basically do nothing with them except claim your rewards accrued from staking. That’s where the term “Total Value Locked” (TVL) comes in. With liquid staking, the aim is to help the user make use of their staked assets while they’re still locked, thus unlocking liquidity of this TVL.

The stkATOM has a 1:1 value ratio as the $ATOM. With the stkATOM, you can retrieve your staked ATOM and without it, you can’t. This allows the user to earn normal rewards by virtue of staking ATOM and gain additional rewards by using the staked representatives for various processes in the DeFi space (lending, borrowing and LP rewards for providing liquidity). An example is the LP programs for stkATOM and stkXPRT on SushiSwap in which users are incentivized with retroactive rewards. Now that we understand this, let’s look at the effects that liquid staking might have on protocol security.

As stated earlier, an important factor when it comes to staking is the amount of yield that the staker hopes to generate from the process. One very common feature now is that generally, the amount of yield from PoS staking is less that what’s obtainable from DeFi staking. This scenario would make DeFi staking look more attractive and users would feel less inclined to commit their tokens to a lower yielding platform. When this happens, there’s risk within the network as more stakers would prefer to carry out DeFi activities with their tokens for better yield. When the staking rate reduces, the network becomes less secure and you can’t really blame the stakers who are really after high yields. Many active validators would then have a majority of the remaining stake with them, thus leaving the network at risk of an attack.

That’s where liquid staking comes in. Stakers can commit their tokens to the PoS platform to earn staking rewards for helping to bolster network security. They are then issued representative tokens that can be taken to the DeFi space for more yields. It’s a win-win for all parties involved.

As stated earlier, the there is an increased desire to stake as users know that they can earn double rewards. In the absence of a liquid staking protocol, users can choose to stake in a PoS protocol to participate in network security and receive rewards, or they can decide to participate in the DeFi ecosystem for a general greater return. Liquid staking allows them to do both and so encourages users to stake on the PoS networks, thus maintaining the security of the network.

Exposure for the project

When users begin to see staked representatives of certain assets in the DeFi space, they begin to look into the projects. This would bring exposure to the projects. For example, if a user goes to SushiSwap and sees the stkXPRT-ETH pool, they may be tempted to look into the asset used to generate the staked representatives. This would take the user to XPRT and the Persistence protocol. More users may then move to acquire more XPRT and stake on the pSTAKE platform so they can get rewards for staking on pSTAKE while also providing liquidity for the stkXPRT-ETH pool on SushiSwap. This further strengthens the security of the network, as the staking ratio on the network increases with more XPRT staked via pSTAKE.

Liquid staking has come to stay and now it’s a case of taking advantage of the rewards system. That being said, we cannot overemphasize the effect that liquid staking has on protocol security. More and more opportunities will arise to further strengthen networks through liquid staking and it would be advisable to follow the trend. 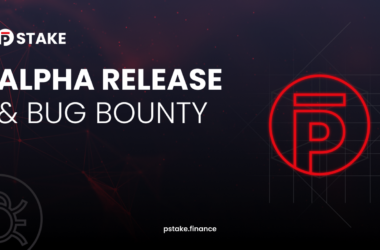