pSTAKE Team
0
0
0
With pSTAKE’s launch of liquid staking for $ETH next in the pipeline, let’s explore how Ethereum 2.0 is poised to fuel the advancement of the PoS ecosystem.
Total
0
Shares
0
0
0

By virtue of its massive user base and network, Ethereum has long been a dominant player in the crypto space, particularly in DeFi (Decentralized Finance). It currently sits as the second-largest blockchain network behind Bitcoin with a market capitalization of over $370 billion and 472,000+ active users at the time of writing.

A recent announcement from the Ethereum Foundation revealed that the current Ethereum mainnet is set to merge with the beacon chain, which uses a PoS (Proof of Stake) consensus mechanism, as soon as Q3 2022. This has been long-awaited by many and would signify a major upgrade to the entire network, initiating the beginning phases of this transition.

Today, we’ll be providing an overview of what Ethereum 2.0 is, the key mechanics behind this upgrade, and the ultimate impact it’s expected to have on the PoS ecosystem moving forward.

Ethereum 2.0 (now officially deemed “The Merge”) has been long-awaited by the community and is years in the making. As a general overview, the network upgrade over time will be the full switch to PoS consensus for Ethereum.

This is important because it pivots away from PoW mining on the network, which consumes tremendous amounts of energy to confirm and validate transactions; this has been the cause of slower transaction speeds and often incredibly high gas fees. To many, Ethereum has been unusable because of these inefficiencies, especially for retail users who are unable to pay around hundreds of dollars in gas fees alone.

With the upgrade on the way, the PoS consensus mechanism will allow for validators to use staked ETH to secure the underlying network, therefore enabling a far more secure, scalable, sustainable chain. Throughput across the entire network will substantially increase, as the node that records every transaction will be selected by an algorithm, thereby increasing the possibility of selection if a node owner holds more ETH.

Given the fact that each node is staking, an attack on the network becomes far more expensive and unattractive to hackers. Moreover, this transition is expected to ignite a tremendous increase in the adoption and usability of Ethereum.

Ethereum developers are working on implementing several key features and changes for The Merge, which are poised to fundamentally enhance and improve efficiencies across the board for the entire network.

The full launch of Ethereum 2.0 will be executed in several phases – users staking ETH today won’t be able to unstake their tokens. Moreover, unstaking (in addition to ETH withdrawals) will go live after an update once the Ethereum 1.0 and 2.0 Beacon chains are merged.

If a user has less than 32 ETH, they cannot participate in staking directly. Instead, they will need to stake their assets via a staking pool, such as pSTAKE, Rocket Pool, or Lido.

Here’s a quick step-by-step look at what’s expected in the pipeline:

As the withdrawals after making a validator are disabled, many liquid staking solutions are coming into the market to increase the stability of Ethereum 2.0’s Beacon solution while providing stakers with liquidity via staked assets.

Based on the Ethereum Foundation’s current timelines, the Ethereum 2.0 upgrade is progressing and set to make shock waves across the blockchain space.

A Profound Impact on Liquid Staking

The launch of Ethereum 2.0 has the potential to dramatically increase demand for liquid staking across the board. Existing crypto and DeFi users will be attracted to engaging and interacting with liquid staking protocols, given the fact that Ethereum will have higher efficiency and throughput, including gas fees that are expected to be drastically lower.

As a whole, liquid staking and layer-2 protocols on Ethereum are expected to flourish, with a wave of new and existing investors pouring in to capitalize on DeFi opportunities allowing them to maximize the use case for their liquid-staked assets. As previously noted, Ethereum’s total market capitalization currently exceeds $386 billion, meaning a colossal amount of capital that will soon be available for liquid staking.

In many ways, the current version of Ethereum has significantly deterred investors given its inefficiencies, which have rippled across all protocols and dApps (decentralized applications) built on the network. Ethereum 2.0 is breaking the shackles and opening new avenues of opportunity for everyone in the blockchain space.

This, in turn, signifies promise for pSTAKE’s liquid staking ecosystem and other related protocols built on or connected to the Ethereum network. pSTAKE will soon be launching stkETH (liquid staked asset for ETH) in Q2 2022, which will ultimately capitalize on the massive opportunity that lies ahead by tapping into Ethereum’s vast ecosystem.

This is only the beginning of much more to come and is setting the next chapter for liquid staking to become the industry’s preferred staking mechanism and dominate the DeFi realm. 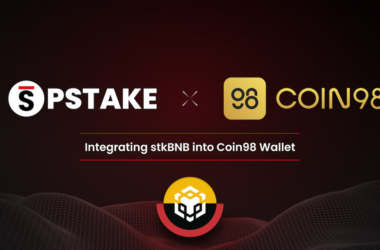 The month of October was an exciting period for BNB, as the numbers continued to increase across the…