Via the implementation of IBC, new and exciting Interchain native features have been introduced to allow for more seamless communications and operations (i.e. Interchain Accounts & Queries), significantly boosting the user experience. Unlike a bridge between blockchains, IBC doesn’t require any trusted third party to operate and is capable of expanding far beyond token transfers – it enables arbitrary data transfer between chains and is therefore crucial to interactions between the Persistence and Cosmos networks.

Let’s take a look at how both of these features work within the Cosmos ecosystem along with how pSTAKE will leverage them to launch our new stkATOM product to enable non-custodial liquid staking through Cosmos-native actions.

Both of these features were added to Cosmos as part of IBC 3.0.0, which was originally released with the Cosmos v7 Theta Upgrade on March 25th, 2022.

This is made possible by creating a concept of Host and Controller chains, where an account created on a Host blockchain can be controlled by an authentication module on a Controller blockchain.

Interchain Queries (ICQ) are a feature that allows a blockchain to read data from another network, allowing developers to securely retrieve data from its storage by requesting information about the network or application state. They’re a key addition to DeFi applications, allowing them to query required data accurately without needing consensus.

For the initial network to prove that the result (or query) is accurate, a cryptographic proof is attached to every value. Previously, queries would only be functional within the same blockchain – ICQ solves this by allowing blockchains to fetch data from different zones.

For Interchain Queries to function, two blockchains need to be interconnected through IBC. In addition, you need a relayer to send messages between these zones, a module to create and verify the queries, and a system to decipher the rules and enable them for use.

ICA enables stkATOM to be a completely non-custodial liquid staking solution, meaning your assets are never held within a custodial wallet owned by Persistence or anyone else. Instead, they always belong to you, where approving transactions through the stkATOM interface simply allows Persistence to stake your ATOM on your behalf (and nothing more).

To enable these mechanics, it’s important to understand how stkATOM uses ICA and ICQ.

pSTAKE will use two Interchain Accounts as follows:

When a user stakes their native ATOM on pSTAKE through the stkATOM interface, the Persistence Core-1 chain (Controller chain) submits an ICA staking request to Cosmos Hub (Host chain) via an event-driven architecture enabled by relayers between the two networks.

Staking then occurs as if it were done natively by Cosmos Hub itself. A very similar process is utilised when a user requests to unstake stkATOM on pSTAKE.

The core staking logic of the stkATOM Cosmos application is defined as a Cosmos SDK module (which we call the liquid staking module).

Auto-compounding is done daily and facilitated by both ICA and ICQ. Once a day, an ICA transaction is used to claim staking rewards, which are sent to the aforementioned reward account. In the current stkATOM implementation, ICQ is solely used to query the balance of this account periodically. This balance is then sent via an ICA send request to the delegation account, from which it’s staked.

Since the liquid staking module on the Persistence Core-1 chain checks every block to see if there’s an outstanding balance in the delegation account, staking will occur virtually instantly.

Cosmos & Interchain Modules: The Next Evolution

pSTAKE, the staking solution for The Internet of Blockchains, is working towards deploying our new stkATOM solution on the Persistence Core-1 chain, which will leverage ICA and ICQ to enable a completely non-custodial liquid staking solution of ATOM on Cosmos.

The addition of ICA & ICQ will be monumental in how other IBC-enabled blockchains interact with one another. Moreover, they’re key features to the future of the Interchain and growth of the Cosmos ecosystem.

This will usher in an entirely new era of utility, composability, security, and activity to spark the next wave in Cosmos and liquid staking.

Brace yourselves – the movement is just beginning. 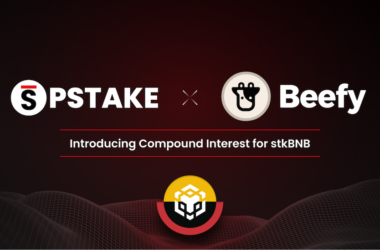 Learn more about how Beefy Finance is bringing additional utility to stkBNB across BNB Chain DeFi. Get the latest updates on our key stkATOM product developments as we set the stage for the mainnet launch. Learn more about our integration with OpenLeverage to bring more DeFi utility to stkBNB and BNB holders.